On a hot, humid summer day in 1974, I paid my first visit to the United States Metals Refining Company in Carteret New Jersey. That day not only left an indelible picture in my mind, but also marked the beginning of a long love affair with copper.

USMR as it was known throughout the industry was the largest secondary smelting and refining facility in the United States, and was a division of Amax Inc., one of the largest and most diversified natural resource organizations in the world.

In operation since 1902, USMR was located 20 miles southwest of New York City, with a deep water port on the Arthur Kill, (kill being the Dutch word for river or canal) directly across from Staten Island NY. It was a landmark unlike any, punctuated by its 425 foot high smoke stack, the tallest stack east of the Mississippi. There was nothing small about the operation, or its complexity. Annual production of refined copper was in the range of 180,000 MT; silver: 40 million troy ounces; gold: 800,000 ounces; platinum and palladium combined: 100,000 ounces, in addition to some 75,000 tones of oxygen free copper, as well as copper powder.

Having just joined a management training program within the Copper Division of AMAX, I was sent to USMR to see the operation to get a better understanding of the work I would be doing. What an education! Smelting; refining; blister copper; anodes; cathodes; ingots; wirebars; billets; cakes; precious metals; scrap, scrap and more scrap. It was enough to make your head spin, but there was no better place to learn the business.

That was a long time ago, and a great deal has changed since then, reflecting the ongoing evolution of our industry.

Until the late 1970’s New York was the center of the universe for the copper industry. Although the mines were located out west, their headquarters were for the most part in Manhattan, along with the bankers, brokers, merchants, and of course the New York Commodity Exchange. Going just beyond the city, the copper trade was a major part of industrial activity in the Northeast. Not far from USMR, American Smelting & Refining had a plant in Perth Amboy New Jersey, while Phelps Dodge produced copper at their secondary operation in Laurel Hill, Queens New York. Being on the water enabled the copper producers to ship wirebars by barge to wire & cable mills along the Hudson River, or cathode, ingot and wirebars to Commodity Exchange warehouses. Not far away, the Copper Valley in Connecticut was home to the brass mill industry, while dozens of wire mills were scattered about New Jersey, Connecticut, Rhode Island, Massachusetts, and upstate New York. (see charts below) 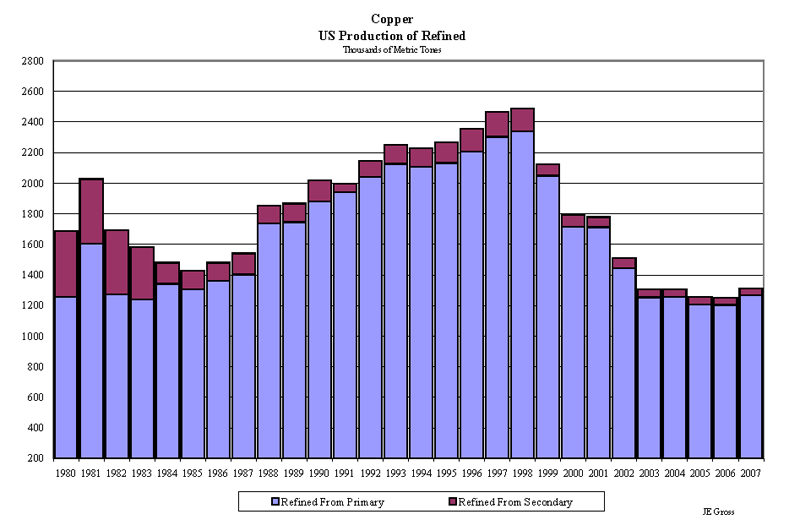 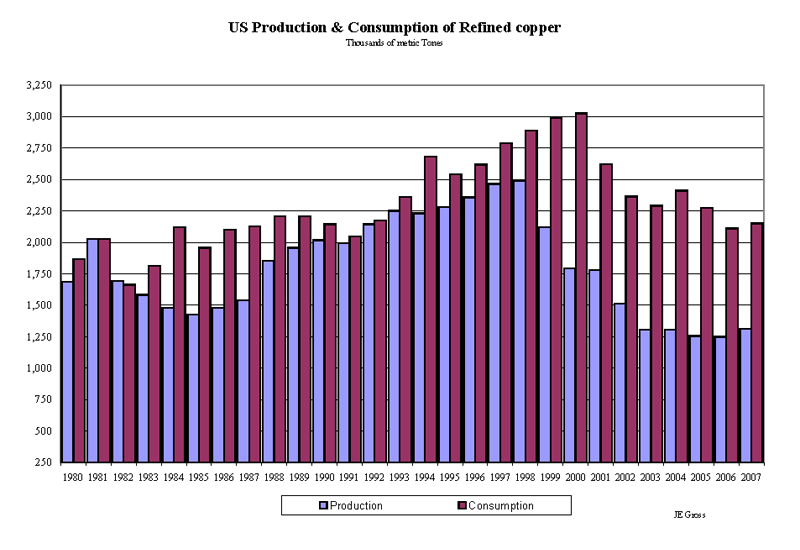 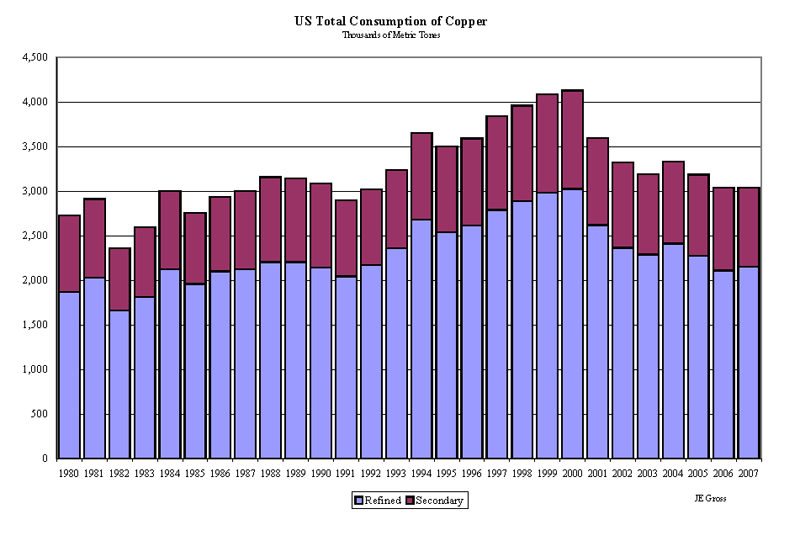 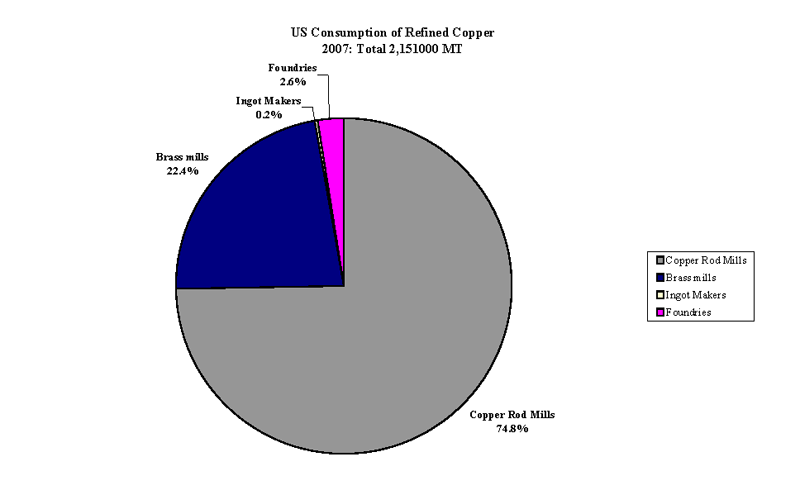 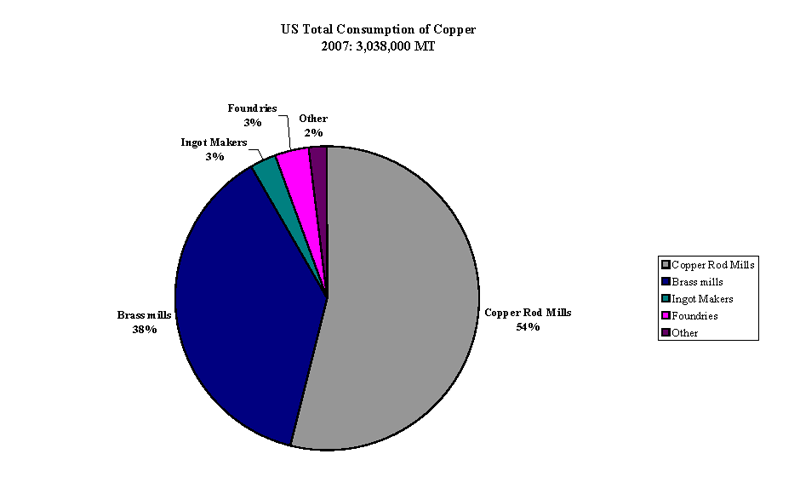 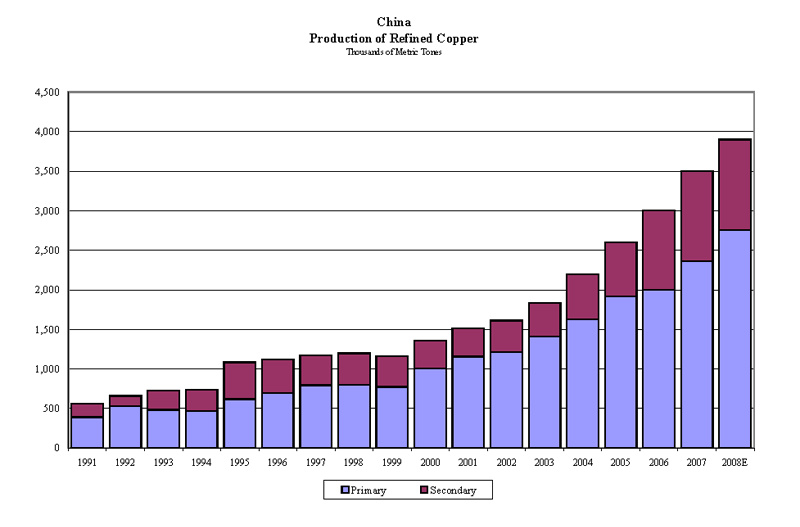 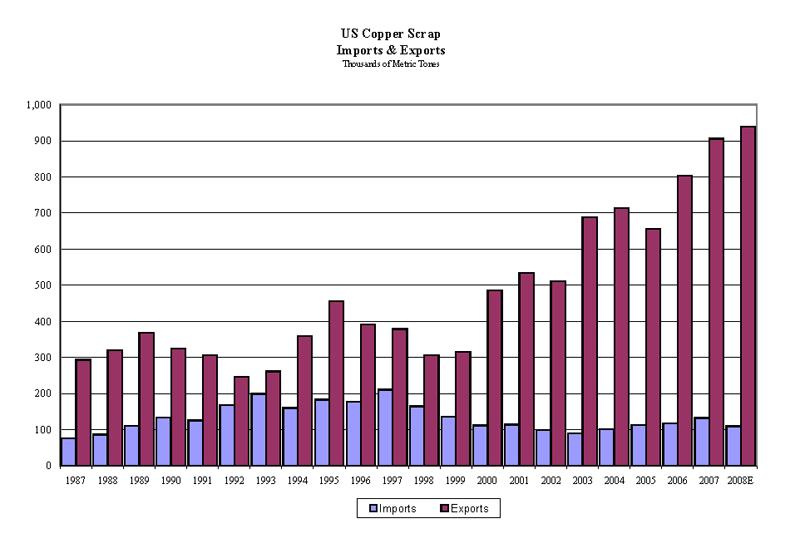 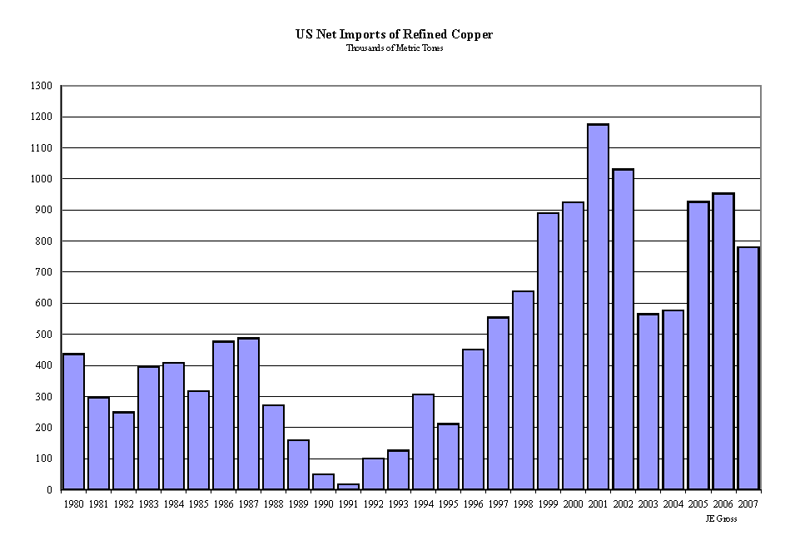 Of course, where goods were manufactured, scrap was generated, and with it, a network of scrap dealers who’s job was to find a home for the metal to be used again. This is one of the most important characteristics of copper – its ability to be recycled, over and over again, regaining its natural state, after being refined, or being used directly in the application of a different product.

Paradoxically, although the recycling of copper is essential to the industry, key sectors of it no longer exist. The advent of stringent environmental regulations, coupled with cyclical market conditions as well as outdated technology, all took a severe toll on secondary smelting and refining in the United States.

Given the importance and complexity of copper recycling to our country, and indeed the global economy, it is important to look at long term trends to better understand where the industry was, where it is now, and what the future may hold in store.

Typically when discussing production and consumption of copper, the point of reference is refined metal. But this requires explanation, as the supply of refined copper is a combination of primary material, or that which is mined from ores, along with scrap, or secondary material that was recycled. Further, copper scrap can be divided into two major categories. They are 1) new scrap, generated in the manufacturing process, or 2) old scrap, which could result from a building being torn down, old machinery being broken down, or an automobile being dismantled. Depending on the grade of metal, scrap from either category may be consumed directly in another application such as a foundry, where strength is more critical than purity, or in a brass mill where the copper will be alloyed with other metals. Historically, lower grades of scrap not suitable for another direct application, due to impurities, contamination, or even market conditions would find it way to a secondary smelting and refining operation.

As a point of reference, in 1980, 1.686 million metric tones of copper was produced in the United States, of which, 1.256 MMT, or 74% was from primary material, while 430,000 MT, or 26% was from scrap processed through a secondary operation. At that time, six major secondary smelting and refining facilities were operating in the United States.

The early to mid 1980’s was a very difficult and painful period for the copper industry, as low prices, high cost labor, and strict environmental requirements reduced output of metal overall, with secondary facilities hit particularly hard as some companies to include USMR and the PD Laurel Hill facility were forced to close permanently.

By 1988, market conditions improved dramatically, but the structure of the industry was markedly different. That year 1.852 MMT of copper was produced, but secondary sources comprised just 115,000 MT, or 6.2% of the total. 1998 saw the peak in total domestic output of refined at 2.487 MMT, but it was also the final year for secondary production, as the last two remaining facilities threw in the towel due to the high cost of regulatory and environmental compliance.

If there is any curiosity in the numbers, it is found within the global breakdown of statistics. The United States is the largest economy in the world, and until 2002, was both the largest producer and consumer of copper. The equation changed that year as China surpassed the United States in both categories. How did this transition occur? Some twenty years ago China began gradually moving from a centrally planned Communist economy, to a market driven, quasi capitalistic system. With this change the country marshaled its resources toward developing an export based economy, driven by low cost labor and production. Further, it was free of environmental restrictions that existed elsewhere, and the doors were opened for foreign companies to invest, or relocate their manufacturing operations.

From that beginning, the evolution occurred naturally. Manufacturing everything from toys to tools, appliances, electronics, furniture, machinery, goods of all descriptions required ever increasing quantities of steel, aluminum, copper, rubber, plastic, paper, and other raw materials. Also, just as scrap is generated in every manufacturing process, China found a way to recycle materials internally, and also learned that it could process lower grades of materials that other countries discarded, further reducing costs in the supply chain. Thus as relates to copper, Chinese production and consumption rose dramatically. In 1991, China produced 560,000 MT of refined copper, of which 70% or 390,000 MT was from primary material, while scrap comprised 170,000 MT, or 30%.

Over the subsequent 16 years, China’s production of copper rose 525% to 3.500 MMT by 2007, with the same ratios of primary and secondary material holding fairly constant. Thus, scrap consumption for refining climbed some 966,000 MT, or 568% to 1.136 MMT, which does not include scrap used for direct consumption. Where did the metal come from? All over the world, and specifically in large part from the United States.

Despite the nonexistence of secondary smelting and refining in the US, there was nevertheless continued demand for scrap by consumers, particularly in the brass mill sector. But foreign trade changed dramatically in 2000 as exports of copper based scrap began rising exponentially to satisfy the insatiable demand of furnaces in China, among other countries. From 315,000 MT in 1999, total exports of copper scrap more than doubled to 689,000 MT by 2003, thereby causing a shortage of scrap raw materials in the United States, and forcing consumers to seek help from the government to limit exports of metal.

Within the US, lines were sharply divided between those to sought to limit exports, in order to make more metal available to domestic consumers, as opposed to the other contingent, who believed metal should be sold to the highest bidder, regardless of where they were. Ultimately the argument for free trade prevailed, as the government took the position that limiting exports would result in retaliation by foreign countries, or lead to other protectionist measures. Clearly, this was a contentious issue, but not without precedent.

In 1984, as domestic producers were struggling to survive in an environment of low market prices and the high cost of production, they petitioned the government for assistance to stem the tide of refined imports. The basis of their argument was that foreign producers were not held to the same standard of environmental compliance as the domestic industry, and lower cost foreign labor was subsidized by government programs. In 1984, President Reagan rejected the producer’s request, effectively saying that import restrictions were “not in the overall national economic interest”.

The obvious question is, ‘why would we export a vast amount of scrap that should be recycled here’? The simple answer is the high cost of regulatory and environmental compliance. Ten years ago we saw the closure of the last secondary smelting and refining facility in the United States, thus, there is no home for much of that material to be recycled here.

Today, the copper industry, and indeed global economies are facing severe challenges. The past five years saw rapidly rising prices driven by strong fundamentals, and supercharged by cheap and easy credit, that fostered excessive speculating trading. Those days are gone. Markets that once embraced risk have become risk adverse, and the theory of a ‘Super Cycle’ in commodities, that would hold prices aloft for many years to come, has gone bust.

Nowhere was this more apparent than in the price of copper, being as it is the bellwether of economic activity. On July 2, 2008, Spot copper closed on Comex at $4.08 per pound. By year end, the price had collapsed to a low of $1.25, off $2.83, or nearly 70%. In response to the downward spiral in global economic activity, governments and their respective Central Bankers have been injecting trillions of dollars into the financial system in an effort to stem the slide, and reignite economic growth.

In time, the excesses of the past several years will be eliminated from the system, setting the stage for recovery, to be followed by growth and expansion once again. As for copper, it too will recover, and while we will not see resurgence in smelting and refining of secondary copper in the United States, it would not come as any surprise to learn that someone, somewhere is developing an environmentally friendly process, that will make it economically feasible to recycle more metal here.